Archived news items from January 2006
Since this is old news, some links may be broken.

The past two days I've done a lot of nice programming to streamline things for my classroom. Look for an update about speeding up grading tomorrow, but for now I'll just talk about what I did this morning.

On my web pages at school, all the programming assignments are listed on a single, long page that'd probably be over 20 pages printed by the end of the year. A table of contents at the top of the page lets them jump directly to any assignment, and of course that gets longer, too, as the year progresses.

Anyway, thanks to the DHTML book Mom got me for Halloween and a couple of hours work, the table of contents now collapses and expands. A live demo is worth at least a few hundred words, so check out the old and new versions below.

Way less screen real estate. Tomorrow I hope to get time to write up the details for what I did all yesterday evening.

I drove up to meet this little guy on Friday night, leaving Austin at 6pm. Over 500 miles later, I rolled back into Austin right at 11pm on Saturday night. Whew. In particular, the drive home was rough, because I did the whole five-hour trek at once: west on I-20 and then south on I-35.

Much of I-35E between Dallas and Waco is under construction, with some sections having no-shoulder concrete barricades on both the left and the right sides. It's a bit intimidating screaming at over sixty miles per hour through a two-lane traffic... chute, basically, surrounded by eighteen-wheelers. Now I know what red blood cells feel like. Though my mortality rate is a lot better; as I recently learned from my "Fact or Crap" page-a-day calendar (courtesy of Woot), red blood corpuscles die and are replaced at the rate of roughly 2.5 million per second.

Anyway, enough about me. Speaking of erythrocytes, Hayden's birth was quick and uneventful, but subsequent tests showed his bilirubin levels to be too high. This is very common for newborns, and basically just means his liver wasn't quite working yet. Bilirubin is essentially a waste product of the destruction of red blood cells and if "removal of bilirubin does not go properly, the accumulating bilirubin in the body causes jaundice." (Wikipedia)

Fortunately, bilirubin breaks down in light, so they just had to keep Hayden in the hospital one extra day sleeping in a UV light therapy bassinet until his liver started to take care of business. Which it did shortly after I left East Texas, so both mom and baby are back home now.

I didn't have much down time up there, but I did bring my brother a couple of Linux distributions for his new laptop, and Ubuntu did a great job at detecting everything on there, so we played with that a little.

And music went really well this morning. You shoulda been there.

I got word a couple of hours ago that my third nephew was just born. They're still getting the name settled and I don't have any pictures or anything, but I do know that everything seems fine so far, and that he weighs 7 lbs., 4 oz., and is 18-3/4" long. I'll go visit tomorrow evening, and I'll post a picture and more details when I get them.

Goodness gracious. I understand that Vince Young wants to hang around and play for Mack Brown another year, but talk about a chance to go out on top! Up against the highly-favored USC defense, he looks like he's playing a different game. As the quarterback, Vince had more rushing yards against the allegedly Number One team in the country than most college running backs get against Local Junior College. Oh, and I guess he threw the ball a couple or three dozen times, too. In fact, ESPN writes it "[m]ay have been the greatest championship game performance ever."

If Vince enters the NFL draft this year (and he probably won't), he quite possibly would go as the #1 pick and sign a $50 million contract. Whereas if he plays for the Longhorns next year, who knows? He might break his leg; Texas might have a much worse season. Barring serious injury, he'd probably still be drafted a year from now, but when? Maybe he wouldn't go until the second round and has to "settle" for $18 million. Throwing away $30 million for one more year of college ball seems fairly risky to me. But what do I know?

I turned down several parties to watch the national championship game at home tonight because I was supposed to be also writing a college recommendation letter for a student who needs it tomorrow. Guess what I'll be doing during my conference period?

It's been a lazy week. It's been a rare night that I've been to bed before 1am, and some nights it's been much later.

Last Saturday evening I started losing my voice, and for the first time ever it didn't return in time for the morning service. One of our vocalists had to sing lead, while I merely played guitar. It was interesting at times, but overall everything went really well.

I left for East Texas immediately after church and got there in record time. They'd been waiting on me to open gifts, and both nephews had just been put down for a nap, so we did that as soon as I got there. So, what did I get for Christmas? Books, mostly.

I got three Bibles, all in different translations: an updated New American Standard (NASB), an English Standard Version, and a hardback New Century Version. These are going to be really cool for serious Bible study, because I'll be able to look up any passages of concern in several different good translations.

I also was given a novel, Dinner with a Perfect Stranger, which is (from the Amazon.com review) "the story of two men sharing a meal. The point of interest is knowing that one man believes he is Jesus. What will the other man think by the time the evening is through?" It's a shallowly-covered didactic and apologetic piece, but does a fairly good job disabusing the reader of common misconceptions about what Christians really believe and outlining the philosophical underpinnings of the faith. I read it in just over 45 minutes, and it was worth reading.

My brother got me three cool T-shirts from ThinkGeek. Dad got me a microphone stand and music stand, which were sorely needed. And Mom (in addition to the books) got me a little portable DVD player so I can now have one on the upstairs TV, too.

The heaviest gift by far, though, was a copy of The Complete Calvin and Hobbes, which contains every Calvin & Hobbes strip ever. How heavy is it? Witness a recent Foxtrot comic on the subject:

The funny part is that he's scarcely kidding. The collection weighs in at over twenty-two pounds. It's just much heavier than you'd expect. Of course, with an estimated density of 0.855 g/cc (360 ounces in 728 cubic inches), this only puts it somewhere between methyl alcohol and ice water as such things go. For comparison, if the Calvin and Hobbes collection were made out of, say, alpha phase plutonium, it'd clock in at roughly five hundred pounds. Not to mention the radioactivity. So it's best to keep things in perspective, I think.

I spent several days in Palestine and then went up to visit my brother in Gilmer for a day, and we bought several video games with Christmas money and other funds, and watched Red vs. Blue. Paper Mario was finally returned to me after being loaned out for nearly a year, and I purchased used copies of Pikmin, X-Men Legends, and Metroid Prime. Paul got himself X-Men Legends II: Rise of Apocalypse and Alien Hominid, which is an unusal side-scrolling sprite-based shooter that started its life as a free Shockwave Flash game online. We also played a little Shadow of the Colossus and I got to see Paul beat the game.

But the real video game surprise of the week was when Paul got some money early and purchased Guitar Heroes so we could all check it out on Christmas day. It's basically an air guitar simulator, or like a Dance Dance Revolution where you fret an electric guitar instead of moving your feet. Dad got a good photo of me struggling with the game early on: 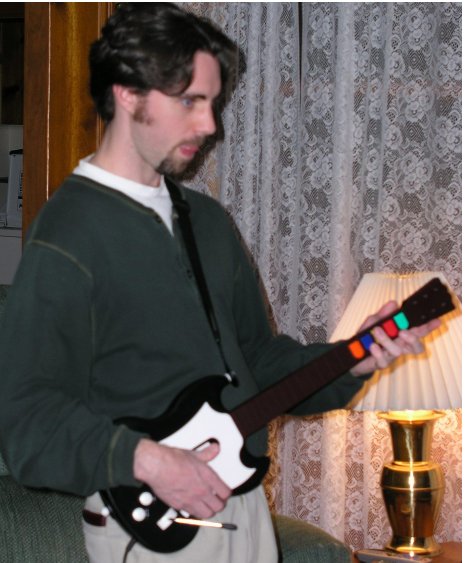 As a guy with both guitar experience and DDR experience, I took to things pretty quickly, and didn't really have much difficulty with even the hardest song on "easy" mode. But I can assure you that things ramp up. Paul's now playing on the medium setting and doing pretty well, but I've seen the intimidation of hard and can't imagine what expert looks like. Tycho (of Penny Arcade) has been playing the game longer than most of us; here's what he writes about the smooth learning curve:

The difficulty progression is extremely satisfying: imagine an image being progressively sharpened, like on some high-tech detective type show, until the license plate becomes clear. This is precisely the way songs in Guitar Hero work. You begin Easy Mode by playing a loose interpretation of a track where every input represents a note cluster. As you ride the difficulty curve, you reach greater and greater harmony with the source material until finally you are doing something almost indistinguishable from it. Oh, that I had never played it! That I had seen it on a shelf, alone, and - tucking it under my arm - brought it home on a whim.

I'm about to beat it on "hard," which sounds like a perverse euphemism.

I then returned to Palestine and spent another day or two watching bowl games and movies. Jet Li's Unleashed was better than I was expecting, but when we watched Dark Water we couldn't help but agree with Kevin Carr of 7M Pictures: "About half-way through the movie, I wanted to stand up and scream, 'Okay, I get it! Jennifer Connelly is a great actor! Can we just get on with the story, please?'"

ringing in the new year with a bang

I drove back to Austin late Friday night and spent yesterday with TODO list items, a haircut, and some much-needed grocery shopping. I then went to Chase's for a New Year's Eve party, where the food was excellent and we played a fair amount of Name That Tune: 80s Edition on DVD. And, of course, no party is complete without some indoor gunfire. On an unrelated note, I'll inform you that oven doors are not, it seems, made of safety glass. I was not involved. And Wayne deserved it.

I took the week off from Lakeline, and Ben and Rachel from Progeny Band did a great job filling in for me, from what I hear. I, instead, took the opportunity to spy on another church similar to ours: RockPointe Church, which meets at Leander Middle School.

It was weird going to a different next-gen church, though they weren't having a typical service: the youth band did the music and the senior pastor and youth-pastor tag-teamed the sermon, with each one doing two out of the four points. Strange.

Since they're portable and since Lakeline will be going portable in less than a year, it was good to look around with that in mind.

This afternoon I've played a little bit of Pikmin, and of course spent a couple hours making this mammoth update. I'm going to try to get to bed real early tonight so I can wake up at a normal hour. I need to get back on a regular sleep schedule before I start back at school on Tuesday. One more day of vacation....