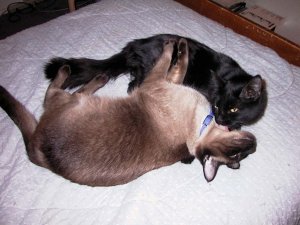 Back in the summer of 1999, I adopted two kittens from one of my students. Since I don't yet have any children, they get most of my care. I don't actually own a camera, so pictures are few and far between. In fact, the most recent pictures I have are of them at 9 months old. They are nearly two now. See the kitten contest page for pictures of them at six weeks.

As a result of my kitten naming contest, the kittens are named Perl and Java. I chose among nearly two hundred and fifty submitted names from dozens of entrants to select my favorite pair, which came from my brother Paul. He wrote:

Perl is a quick and dirty open-source programming/scripting language developed primarily by Larry Wall, popular among system administrators, web programmers (cgi), and hackers. Java is a much-hyped object-oriented language developed by Sun Microsystems, designed to be platform independent and secure. Java has been greatly- touted by the mainstream press, but has had limited impact.

I decided to buck convention and switch the names, so that they intentionally fit personalities rather than appearances. Thus, the black female will be called Perl (quiet but far-reaching) and the light male Java (noisy and superficially attractive but with limited scope once you get into it). Also, Perl sounds like a female name. As Java has gotten older he's turned from cream to a brown which really does suit his name.

There were many other submitted names that I especially liked; here are a few of them. Oh, and for the curious, there was a tie for the most popular names: "Romulus and Remus" and "Mulder and Sculley", each submitted three times.

My former employer Robin McDurham and her husband Doug submitted "Aloof and Allergen", suggesting I call them "Al" and "Ally" for short. They also suggested "Batman and Catwoman", which is amusing if you remember that I used to be a children's entertainer, often dressing as Batman.

One of my students, Tim Yip, checked in with the first emailed entry, which I found amusing:

LHS technical facilitator Judi Doyle weighed in with "vi and Emacs", two popular text editors for unix systems, quite different in philosophy, and quite possibly one of the older holy wars in computing.

For a while, I was considering Jimi (Hendrix) and Janis (Joplin), suggested by my friend and former guitarist Stephen Foster. (He's still a guitarist, we're just no longer in a band together.) If the black kitten had been male, this would have been hard to resist.

My mother suggested a lot of good, thoughtful names; one of her best was Uhura from the original Star Trek series, an "adventurous black female."

Probably the first person to suggest intentionally naming the kittens in contrast with their color, my friend Nick Wilson suggested naming the white cat "Shadow" and the black one "Crystal" (not coincidentally his wife's name). This suggestion was probably influential in freeing me to call the black kitten Perl despite the clear reference to a light color, so he deserves a little credit as well.

A great friend of mine from college, Lee, suggested I call them "Chico and The Man". He didn't supply an explanation for this, but I have. The white male kitten is obviously "The Man". Thus the minority female kitten is "Chico". Perfect.

Another student, Henry Trinh, suggested I call the noisy male "Yakko" and the quiet, active female "Dot". If I watched Animaniacs more often and programmed less, this almost certainly would have won.

Credit should also go to my Dad, who suggested names that were audibly distinct so the kittens would know whom I was calling.

Here's the full list of names, anonymized to protect the innocent.